Whenever I go to a new place, the first thing I look up is the list of local breweries and craft beer bars. I find it the quickest way to get to know the cool areas of town, and get a feel for the nightlife. I also find that when you live in a place, you can get stuck in your neighborhood and miss out on some really cool venues that really aren’t all that far away. Enter the Craft Beer Passport – your ticket to beer exploration! What originally began as a paper booklet, then became a choice of booklets, has evolved again to meet the needs of our changing times. The Craft Beer Passport is back for 2017 – now in app form! Whoa, an app! What inspired you to make the switch?
Ever seen the paper Passport after it’s been through the washing machine? I’ve seen at least 10 and it’s not pretty ;) In reality, Passport holders had been asking for a mobile app since day one when we launched back in 2014. People found the cards bulky and often forgot them at home. We’re really excited about the mobile app because of how it will allow us to keep the program running year round while adding new establishments as we go; all without having to constantly print and distribute updated cards.

We are also looking forward to doing a ton of super fun stuff like curating seasonal bar crawls, highlighting specials at different bars throughout the week and more! In the near future the app will let Passport holders use the same tool for discovering other city’s craft beer scenes once we’ve expanded the program. No need to buy a different card while in Hamilton; just open the app and a whole new set of bars are at your finger tips! What was the development process like? Did you design it yourself, or do you have a team?
I’m a designer by trade so I headed up the development process. I met with numerous passport holders and bar/brewery owners to discuss what they would want to see out of an app like this. Then I went to work designing the user experience and eventually mocked up each screen of the app. James Eberhardt–a friend and neighbour of mine–took up the reins when it came to coding the app and is super excited to be a member of the Craft Beer Passport team! James and I have a ton of awesome ideas for the app which will appear in updates throughout the year!

What has the download response been like?
Excellent! Three summers of using the paper passports meant that when we launched this app it was hardly from scratch. People were waiting to try it out. We have about 2500 downloads so far and this number grows everyday which is super exciting! For the first time ever we actually know exactly how many stamps are used over a given period of time (ex. last weekend) and it warms our hearts to know that we are really contributing to the exploration and support of the craft beer scene here in Toronto.

Since we can buy sets of stamps now, are you seeing people mainly stick with their home turf, or are more people willing to branch out and get the whole set?
Hard to say as it’s just getting started and we don’t know where people’s ‘home turf’ is. The most important thing for us is that people use the app (read: drink good beer) and get their money’s worth. In the past when someone went to 3 out of 20 stops they weren’t really getting their money’s worth and weren’t very satisfied with the program.
The same was true of tourists who were only in town for a few days…the 20 card/$20 buy in was just too great for a lot of people and this was really a shame because even for those 3 brews it would still be great to direct those people to what we feel are some of the best bars/breweries in town, serving good Ontario craft beer! With the app, we can offer flexible payment plans so that these individuals aren’t excluded from enjoying the benefits of the program and can walk away feeling satisfied!

Any big changes to the locations lineup we should watch for?
Generally speaking bars/breweries will come and go on and off the app as the year goes on! We will keep Toronto’s count around 40 bars/breweries. Our goal is to keep the lineup fresh and exciting so that there’s always a reason to set off to use your Craft Beer Passport. You keep surprising us with new, great ideas – what’s cooking for next year?
Dawww thanks! James and I will continue to improve the app…in fact we will be adding a referral program (which will let you earn stamps by telling your friends about the passport) and a gifting feature shortly! My focus will be bringing the program to some neighbouring cities (i’m not saying which ones yet ;) so get stoked to take your Passport on a road trip! 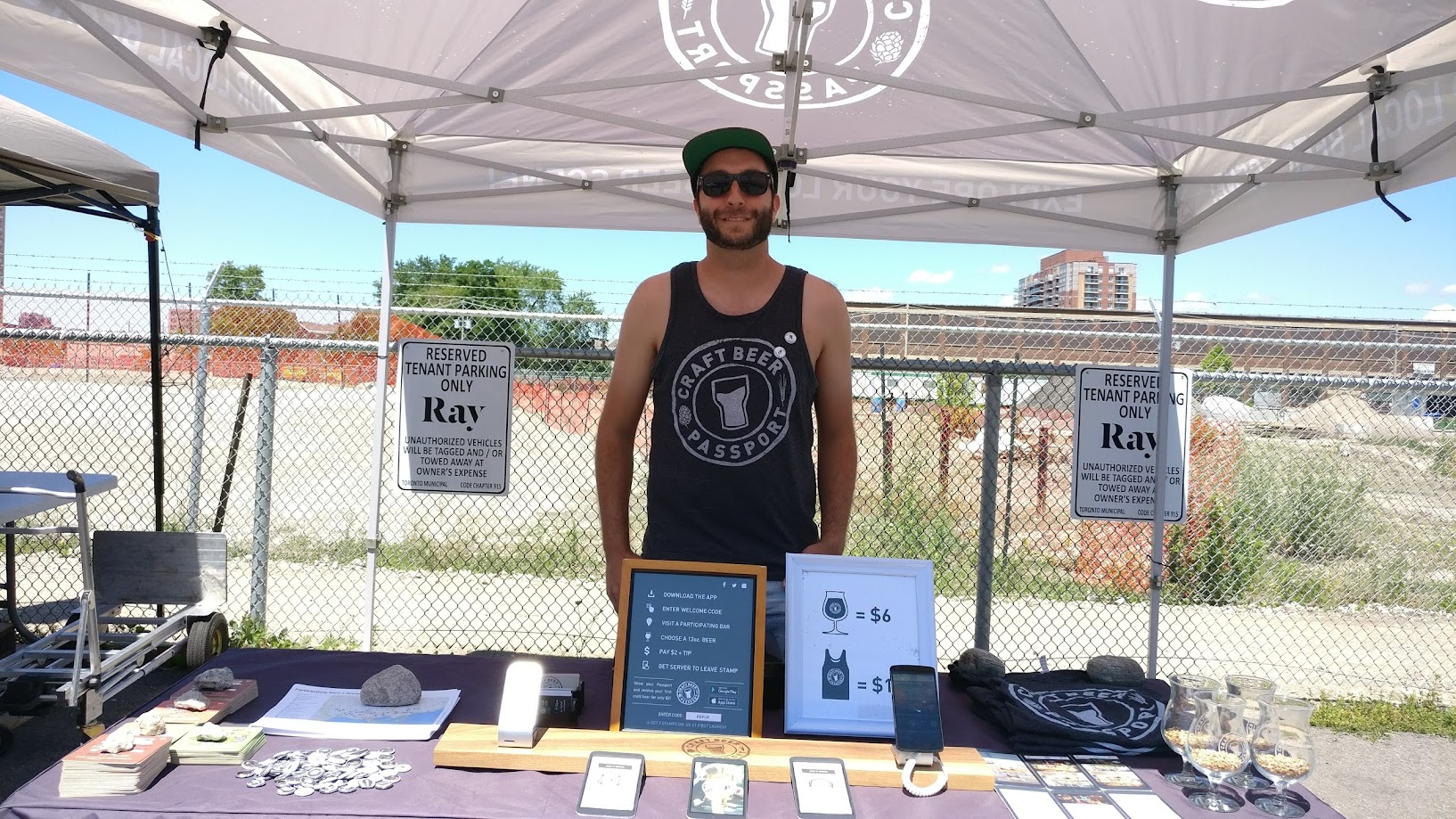 What is your favourite beer discovery so far this year?
Bellwoods had a limited release of a Blood orange gose w/ lactose & vanilla that blew me away! It tasted like a sour orange creamsicle; crisp tartness of blood orange slowly washed away with a smooth vanilla finish. Well, as a self-proclaimed Beer Tourist, I am deliriously excited about the possibility of taking this show on the road. I will eagerly await the “expansion packs”, but in the meantime shall continue my Toronto craft beer journey – one stamp at a time!

Download your own Craft Beer Passport,
On iTunes or for Android